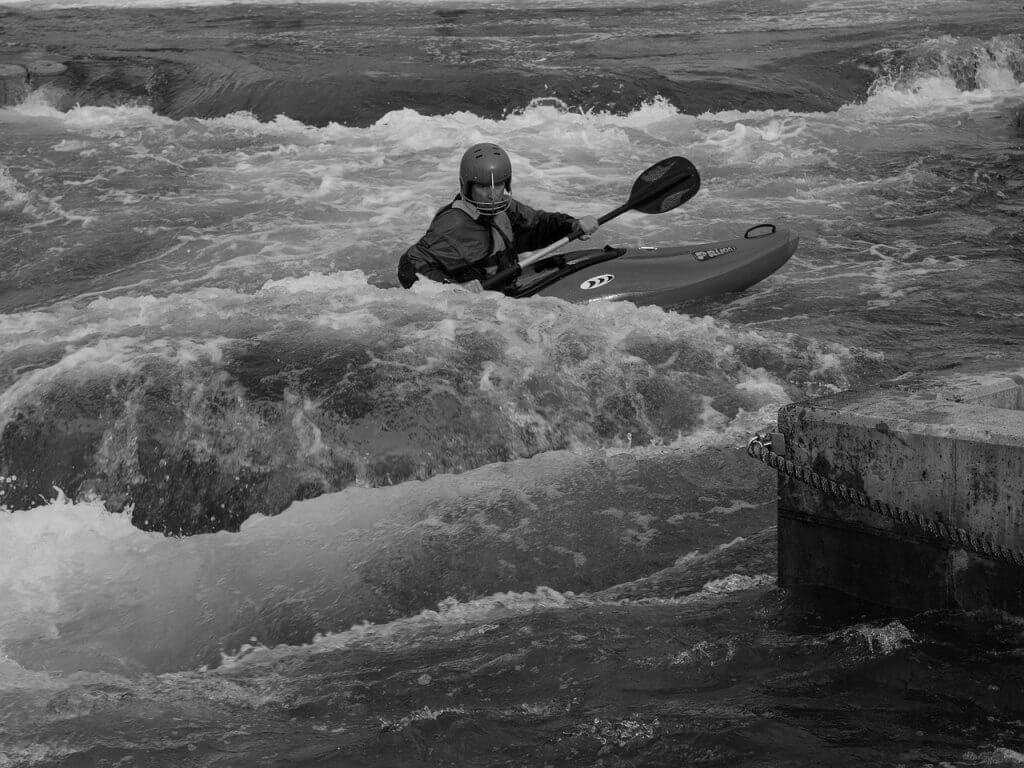 Those words of wisdom were spoken by Gabe, our whitewater rafting guide, as we were blissfully floating down the Snake River near Jackson Hole, Wyoming.

Mitzi, DeLaine and I were sitting on the edge of a big rubber raft- paddles in hand – along with a dozen other adventurers. The weather was warm – in the mid 80’s. The sky was a clear, deep, blue. The little white clouds looked like cotton balls as they floated by. Overhead osprey and eagles soared. On the river’s banks scores of fly fisherman were casting their lines onto the water in the hope of catching tonight’s delicious dinner.

But it was the river that always commanded our attention.
There were swirls – strong enough to flip your raft over – to be avoided. There were rocks to go elude. There were floating branches and tree limbs to stay clear of. As we approached our first rapids, Gabe gave the order to paddle hard. For by paddling he maintained control, guiding us through the rapids.

Gabe’s goal was to keep us safe. Not dry. He did everything to make sure we were soaked. Soaked doesn’t properly describe the experience. Drenched, waterlogged, or engulfed may be better.

For those brave enough, you could ride the BULL. Sit on the front of the raft. Put your legs over the side. Hold onto a rope for dear life. Stare into the face of the rapids. That’s riding the BULL. Upon entering the rapids, the front of the raft dips. The Bull rider is engulfed – swallowed up – by a wall of water. This isn’t just water. It’s 48-degree water. It’s mountain water. It’s cold. It goes down the front of your shirt. It trickles down your back. Your pants are soaked. You freeze. The experience is exhilarating. Exciting. Breathtaking. Death Defying (Well not exactly.)

Then our fellow rafters started jumping – or rather falling – into the river. While we were trying to haul them back into the raft, they were trying to pull us in. After a while you get used to the 48-degree water. It was very entertaining to watch. The raft filled with water each time we went through the rapids. Gabe handed me a bucket and asked – instructed – me to begin to bail it out. He said that if there was too much water, the raft could flip over, and we would all end up in the river. We could drown. (Scare tactics work.) It takes a lot of work to drain an 18-foot raft of hundreds of gallons of water while using a five-gallon bucket. The biggest challenge was to keep from pouring the water from the bucket into your fellow rafter’s face – or down his back. The screams of agony weren’t pretty.

The final set of rapids was ranked as Level 3, which gives you a pretty good ride. As we approached the rapids the raft accelerated. It arches, flexes, bends and bounces. The river roars. It’s about to swallow another victim. The Bull rider screams “OH MY GOD!!! Without warning, she disappears under the water. We slide into the rapids and are hit in the face with a ten-foot wall of water. What is going to happen to us? The adrenaline is flowing. We’re pumped up with excitement. We hold on for dear life. We keep paddling. And then it’s over. We made it.

The rest of the adventure is uneventful. The remaining rapids are easy. We’re experienced pros. There are no more challenges to face. Life should be this easy.

In Sales, Go With The Flow

“As in life, it’s easier to go with the flow than to fight the river’s current.”

You can go through life trying to fight the rivers current. Or you can go with the flow. You can spend your life calling on the same prospect over and over – till they buy or they die. Or you can look for people who want to do business with you.

For many years I wondered why it is that bright and talented sales people, and very successful businesses, reach a sales plateau and for the most part never grow much beyond it. One day it dawned on me. They reached a plateau, where their business flattened out. Why? Because they stopped prospecting. They stopped looking for new customers. They had a database filled with hundreds – thousands – of people. People they called on who never bought. They were playing the “Whoever has the most people in their database WINS” game. Their hope was that if they:-
• Called on the prospect long enough they would get an order.
• Built a ‘relationship’ they would get an order.
• Became ‘friends’ they would get an order.

They were hoping that the current vendor would goof up – big time – or the sales rep who had been servicing the account would leave. And then they would get the order. This sales methodology isn’t “going with the flow.” It’s fighting the river. This isn’t selling – finding problems and offering solutions – it’s scavenging.

Going with the flow is finding a prospect that: –
• Has a need for your product.
• Wants to do something about it.
• Can make a decision, and
• Has the authority to write a cheque.

When making a presentation, put away the PowerPoint. Keep your catalog in your briefcase. Pull out a pad of paper. Ask questions and take notes. Find out as much about your customer’s business – and problems – as you can. And when you find what appears to be an opening, don’t shift from asking questions to saying, “We’ve got something that will do exactly what you want.” and then start selling. Instead, ask more questions. Determine the depth, width, height and breadth of the problem. Then work to discover the economic impact, or financial consequences. How much is this problem costing the company? What is the pound value? I love people with million pound problems. Then my £100,000 solution is no longer too expensive.

In sales, go with the flow. Search for people who have problems that they want to solve, and who want you to help them with the solution. You’ll make more money, close more sales, and have more fun. And you won’t have to work so hard.

More Articles from our Mentor Jeffrey Mayer will be shared next Month..Jeffrey Mayer my Mentor helped business owners, corporate executives and sales professionals, set their priorities, get focused, and achieve their goals, so they can grow their business, get ahead in life, and live their dreams. This article is reprinted with permission from “Jeffrey Mayer’s Succeeding In Business Newsletter. Copyright© 2004, Jeffrey Mayer. All rights reserved. Updated versions of his Sales Tools can be found at: http://www.succeedinginbusiness.com/catalog.html